The Psychology of Elevator Behavior Explained 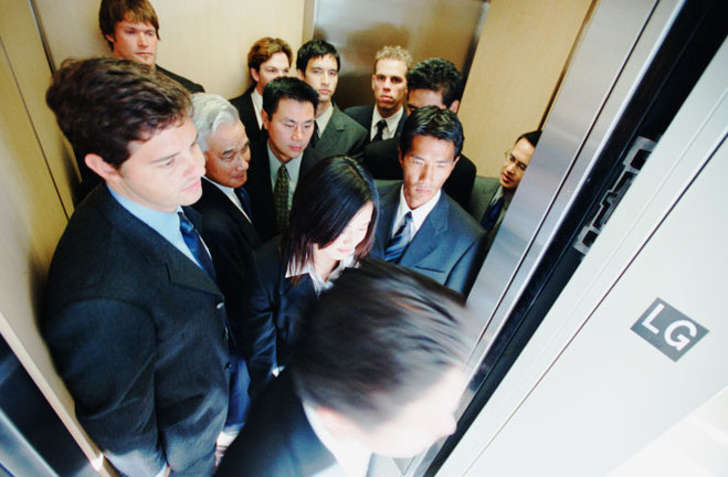 What Causes Us to Shut Down? Scientists weigh in to explain why we behave so differently in elevators.

Ever wondered why it is we all tend to behave so differently in an elevator? Well, at least one specialist has decided to try lifting the lid on elevator psychology and explain why it is that we change so much when tossed into a box.

“Most of us sort of shut down. We walk in. We press the button. We stand perfectly still.”

The study comes courtesy of the University of North Carolina at Charlotte’s Dr. Lee Gray, who remains adamant that the humble elevator doesn’t get nearly enough credit for its sociological importance.

“The elevator becomes this interesting social space where etiquette is sort of odd,” he claims.

“They are socially very interesting, but often very awkward places.”

Most stop talking entirely, some face the wall and the rest stare silently ahead. It’s as if all social norms are put on temporary hold until the elevator reaches its final destination – even when the folk in the lift all know each-other, it’s still a wholly different experience than the outside world.

So really – why is it that we behave like this only in an elevator?

In a word – subconscious anxiety.

“You’re in a machine that’s moving, over which you have no control. You cannot see the elevator engine, you don’t know how it’s working,” suggests Dr. Lee Gray.

“Usually when we meet other people we have about an arm’s length of distance between us. And that’s not possible in most elevators, so it’s a very unusual setting. It’s unnatural.”

So the long and short of it as far as the pros are concerned is that when we’re put in such close proximity to others in an environment beyond our control, it’s instinctive to try to avoid coming across as rude, threatening, ignorant or negative/unpleasant in any way.

As such, it’s also instinctive to take the easy way out – silently staring at the wall until the bell pings and the doors open!